Like today’s crime-scene investigators, paleontologists study trackways—fossilized footprints— for clues about how dinosaurs behaved. For example, did they travel in herds, like elephants? Did some hunt alone? Did they migrate long distances in search of food? Trackways often hold the key. 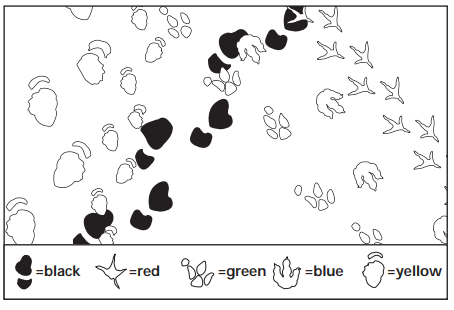 Look at the picture. Let’s say you are a paleontologist who has just come across these awesome clues, frozen in place from the days when non-avian dinosaurs roamed the Earth. What can you figure out about those long-ago creatures by studying their trackways? Look carefully at the different animals’ tracks  and colour them in if you can. Then try to answer the following questions.